Hugely precious and derived from lapis lazuli, ultramarine as a pigment embodied in colour symbolic site as well as spiritual and monetary value. (1) The chemical composition of ultramarine was determined by Clément and Désormes in 1806 and it became widely available after J.B Guimet of Toulouse developed an economic method of synthetic manufacture in 1828. (2)

Whether one considers him a mystic revolutionary or contradictory charlatan, Yves Klein’s (1928–1962) IKB seemed to restore ultramarine’s power by creating an unattainable (3) surface which etches itself into memory and for many, provokes wonder.

In 1956 Klein enlisted the help of Edouard Adam and the chemical manufacturer Rhône-Poulenc to capture the essence of pure pigment as a paint. It turned out that a combination of a colourless polyvinyl acetate resin called Rhodopas M60A (originally a synthetic map waterproofing agent), a dash of alcohol and ultramarine pigment would result in the colour Klein sought - one which retained the ‘extraordinary autonomous life’ of the blue.

The resin, which is still manufactured (as le Medium Adam25), (4) was unavailable at the time of my research and I only became aware of it through the research, so I embarked on an approximation. Initially I was using various here-say techniques canvassed from as many sources as were willing including Edouard Adam‘s nephew Fabien in Paris. However, discovering a research paper by Christa Haiml on restoring a damaged Klein painting Blue Monochrome (IKB 42) (1960) proved invaluable.

IKB is as much about an ideal binding agent as it is about a specific pigment. In interviewing Edouard Adam, Haiml found that: ‘There is no one true IKB pigment. The "pure ultramarine blue, reference 1311," which sounds so precise in Klein's formula, refers to a blue that Adam purchased from his pigment supplier at the time, but his suppliers changed over the course of the years and he cannot trace back exactly where 1311 came from. (5) 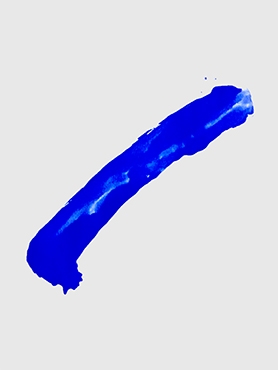 Pigment
I used Kremer Ultramarine Blue Dark (K45010) as used, amongst others, by Haiml to create the most successful versions - however I found that the amount and type of pigment in the mixture and the quantities of each ingredient continually altered the effect.

Resin
Rhodopas M60A was a polyvinyl acetate used by Klein and Adam for its high adhesive strength, which allowed a low resin-solvent concentration. Unavailable when I was working on this project I initially replaced Rhodopas M60A with PVA wood glue which created a good pigmented surface however it wasn’t quite perfect.

Secret ingredient
The key ingredient on the list still seemed to be alcohol however mixing alcohol with PVA made the pigment darken and plasticise - on one occasion creating pure slime. Once dry, a surface coating of pigment and alcohol could be applied to the PVA pigment mixture to obtain a pigmented effect. However, this surface, despite its beauty was not durable. My breakthrough was the miscibility of Lascaux Resoluble Medium 2035 in alcohol. Combining the alcohol and resin seemed the technique closest to that described by all the accounts I had read and, looking at the results, the effect was also closest. The surface was also much more stable than the alcohol / pigment coating and the texture achieved also echoed the ability of the Klein surfaces to retain the textured peaks and troughs achieved by his use of a lambskin roller.

IKB will however always remain an unattainable proposition, not just because it is more process than colour, but also owing to copyright reasons. So, below, you will find a recipe to suspend pigment in a acrylic binder - you may just choose to use ultramarine. 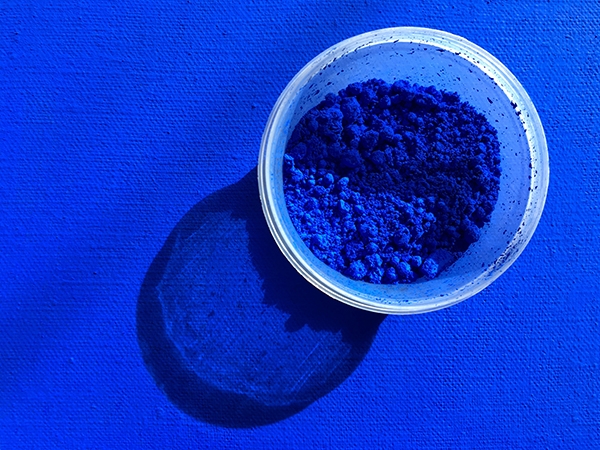 - A brush you are happy to be forever blue...

- Mask (Use best practice when working with pigment and alcohol)

- In a vessel mix a thick paste of pigment and resoluble solution, as thick as you can make it. (Basically 1:1 but I tend to work on texture)

- Keep mixing. You want to coat the maximum number of pigment particles with binder.

- Once you feel you have stirred the pigment thoroughly add some alcohol.

- This will initially loosen the mixture and create a viscous paint but the alcohol will evaporate leaving the pigment rich surface.

I’m really interested in recording how this effect works with different pigments. As the story of IKB reflects - sometimes it takes an open source approach to crack a problem - I'd love to hear your results if you try this technique or improve on the recipe!

with special thanks to Jo Volley, Slade Materials Project, U.C.L

4. Le Medium Adam25 (as it is called for IKB copyright reasons) can still be purchased in Paris from ADAM Montmartre along with instructions: http://www.adam18.com/PDF/Fiche_medium_adam_25_english.pdf